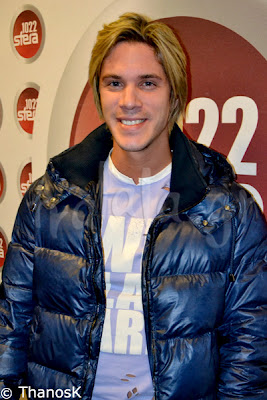 
On Monday 12/12, Nikos Economopoulos was invited by Natalia Germanou toRadio Sfera on the occasion of the release of his new album "Θα Είμαι Εδώ".
Of course, we were there firstly because we love very much Nikos and secondly because we are everywhere ...

Nikos Economopoulos, very cheerful and honest, as always, told Natalia that he does not care to be in fashion, the only thing that he cares is his job. He was asked by Natalia how he feels about having 5 albums under his belt, while some his older colleagues have less than that. Nikos replied that probably it's because he works longer and is not running from one party to another.

He also said that the performance programme depends on the cooperation, that this is indivisible part of the show in the “Fever” nightclub, that the whole programme is tailored to measure. Besides, he said that his passion is to run in races with cars and that the Christmas tree he will be decorating by himself this year ( Why that, Nikolaki? May be this is because if to put a statement about who wants to help Nikos Economopoulos in decorating the Christmas tree you know what would happen? There will be the crowd to fit an entire stadium with volunteers, especially girls-volunteers !!!!)
Nikos Economopoulos, generally represents himself as a lonely guy, he said that in the evenings he likes to go alone to the sea and listening to music because he is an artist. He said that all the things he wants to say about his life he tells through his songs. 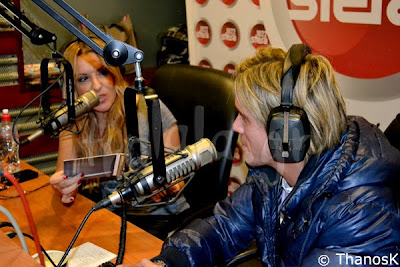 He said, that he is a perfectionist, so this applies to the way he works with the songs – he always asks permission from the authors to let him add his own style features to the songs.
Finally, Nikos expressed his disappointment with the TV, saying that the TV is on the verge of collapse and does not like to watch anything; regarding politics he suggested people should not wait when the situation will be changed, he believes everybody has to look how to change themselves. As for the radio, he said, that the radio doesn’t like the laika songs. When Natalia agreed with him, he joked, that she, as well, probably can’t change the situation but can change herself. 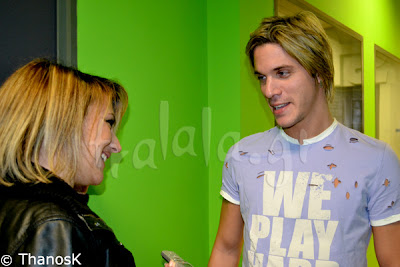 After the interview to Sfera, Nikos willingly made some statements for us (tralala.gr)

- Welcome to your new CD! How do you feel each time you release a new album;

- Always! But it is a good stress, however, to expect when you wait for a response and a positive response from people.

- You know you will have it!

- I am not that confident!

- Last year we talked about the male-dominated programmes you were commonly involved. This year you did the reverse by working with two women ...

- Yes, I have two of them, Elli and Despina. Everything is fine, very nice, cooperation, it is excellent and we have our audience. People come well, although we are in difficult times, we say - thanks God!

- What cooperation, finally, is better: with men or with women, because last year you told me how you like the male-dominated shows ...

- Each collaboration is different! In all my collaborations I've been through very nicely, without saying many, many lies and fooling the world that everything is fine, Indeed, I have gone very well and I can not hide it.

And tell me something last, to avoid a delay, because you already have an exit interview ...I’ve heard ... that in your new CD there is a zeibekiko to be discussed much ...

-Of course! You became our every year omen, indeed!

- Well, you do it this year then! I have been told that I am a lucky sign, that’s it!

- Sure, for us you are! Quickly renew our appointment time, we wish you good luck and thanks!