The Man of the Month talks to “Celebrity” magazine 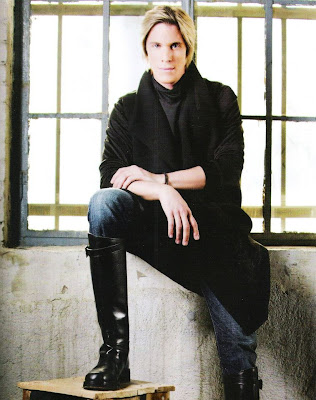 Recently Nikos Economopoulos was named "The Man of the Month" by "Celebrity" magazine. The outstanding young singer gave an iterview to them.

What he was talking about?

Here are some most important statements he made and answers he gave:

With his new album "Tha Eimai Edo" Nikos started to work from April. He is very proud with this work . (He names authors and 2 songs , which were first on air)

Nikos said, the fact that the album became double platinum within the first days, shows that people appreciated this work and he is very thankful for that.

The collaboration with Phoebus happened spontaneously, without any connection to the fact that Nikos is working on stage with two Phoebus’ stars. Phoebus just proposed him one song (Kai ti egine), as he felt that it will suite Nikos.

The names of Despina Vandi and Elli Kokkinou came out while Nikos was discussing a new season programme with Thanasis Papageorgiou, who runs some nightclubs in Athens and with whom Nikos works already for five years. The idea impressed Nikos and “the girls”, as Nikos calls the divas, were enthusiastic too.

He is happy his dream to become a singer came true and he did it by his own actions. Nikos does not want to be popular without any reason and sense and this was not his goal when he took part in the “Dream Show” , his only interest is singing and he is honest to people.

He does not like to talk about his private life and he believes, those who are showing off their life can win attention, but this is a temporary price.

His parents are very happy with his success.

His relationships with women go the “healthy way” as he says :- “I am flirting, they are flirting”

Nikos is not searching for a girl for him, he is mostly interested now in his singing.

He does not drink in general and he is not using drags.

His main passion is his work, his singing. He can’t live without it.

He likes to watch football, but he can’t go to the stadium, because he loses control and starts screaming, which is bad for his voice.

He is a homebody, who likes to sleep and relax at home.

He often goes to his home town, to Kato Achagia (near Patras)

People in Patras love him and he is very thankful for that. He starts and finishes his summer seasons in Patras.

He believes he is an open book, he has nothing to hide.

His dream is to have a family and he would like to have three kids.
celebrity Magazine Despina Vandi Elli Kokkinou Nikos Economopoulos The Eimai Edo Νίκος Οικονομόπουλος