We want to say a huge thank you to Nikos Economopoulos! 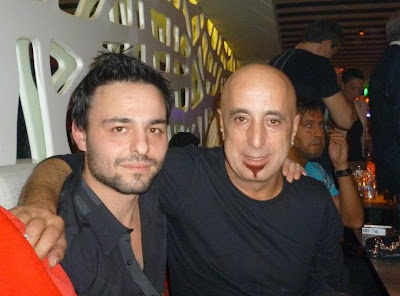 Recently, radio Aquarius FM was broadcast live an interview with two authors of the most disputed song from the new double-platinum album by Nikos Economopoulos. Dimitris Paraskevopoulos, composer, and Panagiotis Mandilaris, lyricist, shared their thoughts about this song and its performer.

Paraskevopoulos: The first few days, people rushed to judge, without having realized the meaning of the song, just because it was something unusual. There were some negative reactions and criticism, but slowly the spirits calmed down. Many of those who did not like it first, later started liking it.
As for me, since I write the music to a song, it means that I approved its lyrics. While it is harsh, it is very truthful.

Mandilaris: This song is addressed only to a very special group of women who, without any barrier and hesitation, could do anything to achieve their goal, culminating with selling their very soul. This is the worst thing. This piece is addressed to women, but, of course, the same actions could be found in men.

Paraskevopoulos: Nobody expected such a song from Nikos. His artistic profile until now was such that no one expected him to sing a harsh and realistic song like that. On this occasion we want to say a huge thank you to Nikos Economopoulos, for the courage to show this song, because it was a big risk. But this risk was justified. Of course, it is still a bold decision and good on him. Just for that I appreciate and thank him very much..
Mandilaris: This song would be a bit harsh for the album title. The 14th position it has taken on the CD suites this song perfectly. It is the grand finale of the album.
Paraskevopoulos: People in the countryside take things for granted. Here in Athens, radio stations are very cautious. They may like the song, but they afraid to play it, because of fear that somebody will tell them something. After all, even at home, we’ve heard words even stronger. But there is a madness happening at the ‘Fever’ nightclub with this song, I was there and saw it.


Paraskevopoulos : I think that Nikos Economopoulos is, probably, the best singer of his generation, a singer with a future. I got to know him better and realized that he was a really honest guy, humble, very polite and a very pure artist. He has not become conceited and I can see it easily, being in this area for years. If he will keep doing the right things, he is going to have a great career and to stay high for ages. Firstly, his voice is flawless. It has an awesome tone, great vocal skills, nothing is missed there. Beyond that it is his personality which will make him to be able to continue and remain in the place. Nikos has the maturity, more maturity than it is common for his biological age. He has got a big life experience, started to work from his childhood, which gave him this maturity. So, he has got a good background to make an amazing career. 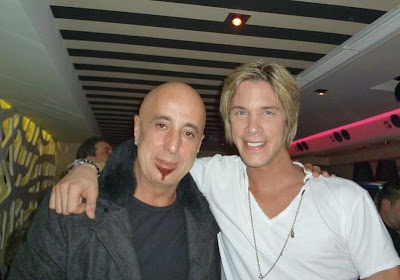 Paraskevopoulos : You can not accomplish anything in life if you do not believe in you with such a force …and it seems form the looks and aura of Nikos Economopoulos, he believes and has a desire to do what he is doing.


( Panagiotis Mandilaras and Dimitris Parakevopoulos know each other for 3 years and apart from being colleagues they became good friends. Dimitris Parakevopoulos is working for years in the big music field and previously he was a member of the band "Zig Zag".
Panagiotis Mandilaras is newer than Dimitris in the music area, he collaborated with composer Panagiotis Stergious, the band "Ηθικόν Ακμαιότατον" and with Georgos Taschounidis. He said that together with Dimitris Parakevopoulos they have written many good songs and hope that one day they will give them to the appropriate artists. They will not write the song with such lyrics as “P**t*n* stin psychi”, it was done for the only one time.)


Many thanks to Eirini Eusebi for providing us with the full text and an audio file of the interview.
Dimitris Paraskevopoulos Nikos Economopoulos Nikos Oikonomopoulos Panagiotis Mandilaris Νίκος Οικονομόπουλος