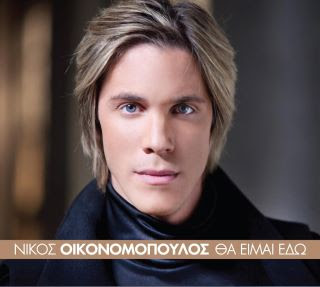 The review of the musical album must be as unbiased as a physician’s diagnosis. That's why let us forget that the CD "Θα είμαι εδώ” (I’ll Be Here) by Nikos Economopoulos, released by EMI Greece, became double platinum in the first two days of sales. And let us not speak about the previous successes of this singer, which were big enough for the author of this article to become too enthusiastic.
Imagine we never heard his interviews about this album and never had chance to read any promotional articles about it.
Just let us try to find out what it is hidden in the title of the album? What it is in the singer’s mind when he is saying, "I'll be here."?

We have in our hands a CD, which contains 14 tracks in it.

For a start, let's take the authors with the biggest amount of the songs invested to the CD. The tandem Christodoulos Siganos (music-words) and Valentino (words) are leading the list. There are 4 of their songs in the album (tracks # 3, 7, 10,12), with one of them (#10, Όλα πληρώνονται εδώ – All paid here)composed together with Marios Psimopoulos.
The last one is a dramatic laiko ballade with a soaring melody, which tells us an unhappy love story. It seems like this broken heart image is also reflected in the song # 7 Ποια ζωή να ζήσω (What life should I live), where it is shaped in another type of the laiko ballade with the biggest in this album vocal range melody.
The song of the same authors tandem “Καλή καρδιά” (Kind Heart), track # 3, gives us some hope with its light words of farewell and a hasapiko dance rhythm.
Finally, these authors lead us to the long-awaited gaiety in the song # 12 “Εξαρτημένος” (Addicted to you). The musical image of this "addiction" may be found in a well veiled tsiftseteli (a female oriental style dance). Now let us think: what is common between all these songs? The answer comes easily : their affiliation to the laika style.

Another name, which a few times appears on the CD is Eleni Giannatsoulia, lyricist. And twice she comes along with Georgos Sabanis, the composer. It is their track # 2 gave the name to the album. This song strikes us from the start, as it begins from a high note in the melody with strong emotional words: "All good things must come to an end”. Their second composition, the track # 8 Που θα με πας ; (Where will you take me to?) brings out an epic style of the poetry and ideally suiting the ethnic nature of the music. These two songs are like pushing the limits of the laika style from within.
The third investment by Eleni Giannatsoulia to the album was written together with a composer Giannis Fraseris. The song #5 Δευτερόλεπτα θα μείνω (I’ll stay for a moment) is a light ballade, which portrays the loneliness, covered by the easy going mask. Which is one of typical ‘laiko”style images.

A collaboration of Vangelis Karatzanos (words) and Vasilis Daramouskas (music), which comes twice in this album , gives us two contrasting in genre pieces. One is
a strong zeibekiko Ήρθε η ώρα να φύγω (It's time to go) and another song , #9 Ψάξε με (Search me), is based on the rock/hip-hop ballade rhythm with a very positive message in the words. The chorus of the song carries laika features in its melody. What it is common in these two songs? The only answer could be: the style of laika.

Now we have some authors who gave only one of their songs to the album.
Let us see what we have in their tracks here.
The # 1 in the CD belongs to Phoebus, it is a dramatic ballade “Και τι έγινε” (And What’s Happened ?) , which can be attributed to the laika style due its orchestration. At the same time this song has got some modern sound qualities.
A passionate ballade by Haris Galanos “Με πειράζει” (It Concerns Me), which is #4 on the CD, has got laika features not only due the instruments involved , but also in it’s deeply hidden rhythm of waltz and well developed melody.
The well known tandem of authors: Alekos Chrisovergis (composer) and Spiros Giatras (lyricist) are offering to this album track #11 Χανόμαστε (We Are Lost), the pure sample of zeibekiko, with its devastating images of the lost love
Once again, in the track # 13 Μάτωσα για σένανε (I Bled For You) we meet an established collaboration of the songwriters: composer Panagiotis Brakoulias and lyricist Nikos Vaxavanelis. Their ballade is an exquisite fusion of blues and rumba with the melody and words, obviously based on the laika traditions.

Finally, here it is #14, the song with a controversial name “ P**t*na stin psychi” (Whore In The Soul). The very title of it brings us back to the roots of the traditional songs "laika", which originated, (same as jazz, by the way) in the most poverty-stricken environment, and carried a lot of rudeness, reflecting the life of outcasts. (The lyrics of the song is written by Panagiotis Mandilaris) Add to this an excellently contoured, we might say, noble, melody by Dimitris Paraskevopoulos and it becomes obvious: this song has an explosive potential of a real musical bomb.

Now, what have we found during our short investigation? The first and obvious thing is that all the songs are, with varying degrees of intensity, tied to the style of laika.
But there is one more, no less important phenomenon there, which is connecting everything and everyone. This is the exceptionally expressive, wafting perfectly the meaning of each word and easily keeping up with the vocal complexities of the songs, voice of the singer. This voice, which is, with its natural richness and beauty, seems designed by nature to perform the Greek song "laika".

According to the choice of songs and how they are sung, the singer talks in his album about his love and devotion to the laika style of music.
“Θα 'μαι εδω - I’ll be here!” -this is the answer Nikos Economopoulos gives to the question about where, in which area of music, he pictures himself as a singer in the foreseeable future.