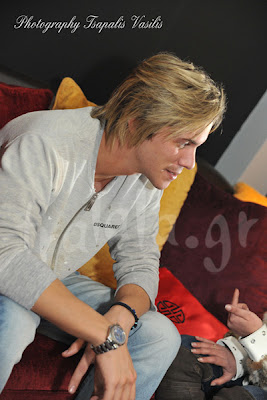 N: There is a bit more rock orchestration there, but the lyrics are very “laiko”, very understandable!
R: The laika-song, however, is facing a trouble, is not it?

N: No, the problem is not in the “laika” music, it is the radio producers who are creating it, let's say! What can we do? We keep on singing !

R: Why, do you think, this has happened? How come that after having a laika song on the top, suddenly the radios do not want bouzouki in orchestration, they prefer a more European sound, what’s happened, finally?

N : Dear Riana, here in Greece we like everything foreign. I don’t know why it is like that. We don’t like our own things, I can’t understand it!

R: However, people, when they like something very much, would create a success by themselves, they play what radios don't play. Besides, now there's a Youtube there and anyone can choose the music they like and not to listen to what is foisted. Although in general, they are trying to brainwash us!

N: Exactly! And not only on radio, but also on television . They play only what suits mediocrity, everything is to do with money! TV has nothing for you to show. I turn on my TV and I do not know what to watch... News? They lie! Every day they say the same things! Serials? Greek productions are not there and instead we find the cheap product of Turkey. It doesn't matter, why do they show Turkish, the matter is why don't they have in mind to do something for us! Everything is a copy!

R: In every your interview with tralala.gr, we were playing with the lyrics and, you know, people like it a lot and ask to do the same, so, let us do it today! And let's start with the most wanted…

N: No, this does not bother me at all! After I sang it, why to hesitate to talk about my songs? Whatever we say and whatever we do in our live, is turning into the songs, is not it right? So, is this song a lie? May be something like that has not happened in my life, I have not lived such a story, but for some people this song expresses what they feel about their life experience. Others have not lived it and therefore it does not express what they feel. Were all my other songs bad? Of course not! Some are good for some people, and some are not. So, when I’ve heard this song, I kept it for three weeks at my house and was thinking a lot, because it had a swearing in it.. After all, everybody sometimes can swear, is there somebody who does not swear? Are we holy people? I I strongly believe in God, I've said it many times, but does it mean I should not swear? Even though it is not right,I am one of those who swear! I am the one of those people who has nerves, I can be pissed off and swear, and this time I took this song. This song is a story of a man who wrote it, who lived this story and also it expresses what the part of the public feels. I, however, did not put this song to the CD in a purpose. I would never do anything to attract the spotlight. I sing songs that I like and, I believe, people like too!

N: (laughs) Better not to talk about it! It is madness happening there!

N: Many times! I think we all use it. When we try not to grieve over something, we are saying: ''Kind heart'' and “Don’t be bothered”

R: ''In "Don’t be bothered” we are finally surrendered”, as you say in one amazing zeibekiko “Hanomaste” ( We are lost) from your CD.

N: Yes, this is both social and love song. It is about the couple lost in everyday life, but also it is about all of us, lost as a society in general. ''In "Don’t be bothered” we are finally surrendered, in our selfishness was desire for a knife fight” Unfortunately we let all be hanged in the air and think that everything will take care by itself, that we have no responsibility. But everyone must look first how to make themselves better to build things up and not only to look to others, to judge them and blame them. We all share the responsibility for what happens. We blame only three hundred in the parliament, but we all have our hands in it. 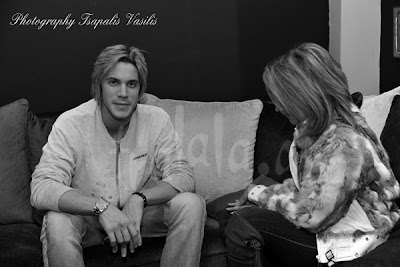 R: You have a song titled "Me peirazei" (It concerns me). What concerns you daily as Nikos Economopoulos, a person?

N: I will respond with verses of the song that has provoked debates ... ''Lies and hypocrisy, and selfishness ...''! And a sham, a quasi-ness , which nowadays prevail especially in this business. I abstain from that. I carry my cross, I have my own problems and I do not want to deal with this quasi-ness.

N: Yes, but what have they had accomplished ? They did nothing to me! And I am not afraid to say, if they will try to do it again, what can I do? After all this is the work ...

R: Can you say in particular?

N: I do not want to, I'll never say! I keep it for myself to become better too!

R: The song " Irthe i ora na figo" ('It's time to leave).'What makes you want to go, is it when you feel uncomfortable or bad?

N: It is when I have nothing in common with those who I talk or have a company. If it does not work, I go. If I don't like something, I change it! When I don't like to watch a TV channel, I change it, so if I do not like to be together with somebody, I change them!
R: "For a moment I will stay, and then you'll be burnt in my mind" that’s what it is said in one of your songs. How easy it is for you to burn somebody in your mind.

N: Now it's easy! I have a big experience in my life.

R: You do not give yourself to people, right?

N: I became like that. Not what I was before. It is wrong of course to not allow people into your life, not converge with others. Hate this point in myself, but I have to do it!

R: You prevent yourself from being hurt later, by using the “safeguards”?

R: You are a typical sensitive little cancer!

N: Yes, the miserable one! (laughs)


R: In the song “Pou Tha Me Pas” you are saying “Where will you take me to, will you love me, or will turn my life into struggle”. How easy it is for you to answer to this one and to cover your insecurities?

N: First of all, this song is about someone who has given (paid) and left. Someone who is answering by actions, not words. There is no other way the one can answer me! 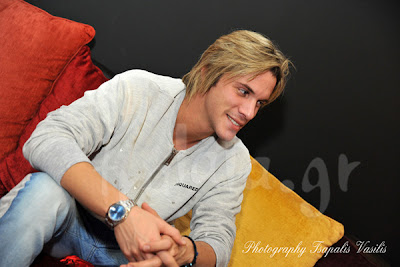 R: The song “Ola plironontai edo” – For everything you pay here - Do you believe in that?
N: Of course! And in many ways, from where you least expect it! I believe in God very much, but there is no hell and heaven, all will be paid here. One thing if you make a mistake and another thing if you hurt somebody in purpose. Important is: when you do something wrong, try to avoid repetition. And I make mistakes, I have to say, and I try not to repeat them, I try to become better. However, and your mistakes and risks you take you have to pay! All to be paid by the same currency and with a small overpayment, sometimes.