No need to compare incomparable! 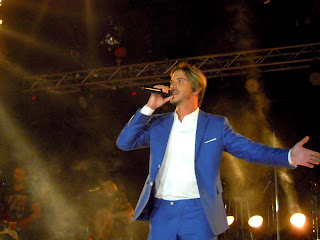 In modern popular music there are not that many of truly beautiful, worthy of debate voices. Besides, we can judge singer mostly on their live performances. So, the dispute should be based only on them.

I often deal with the fact that inexperienced listeners compare Nikos Economopoulos with whoever.
But, let me say, ladies and gentlemen, there are several things to be determined.

First: Nikos sings very accurately, as they say - always in tune, the quality I would like to wish all those who for some reason are compared to him.

Second: The sound of his voice has an exceptional beauty and richness of the tone across the range.

Third: What is given to him is not given to the most of singers. I mean his  rare ability to convey the content of the song, that’s why his singing is a delight for people who do not speak Greek. This is due to the expressiveness of his voice full with the overtones, enriching its sound.