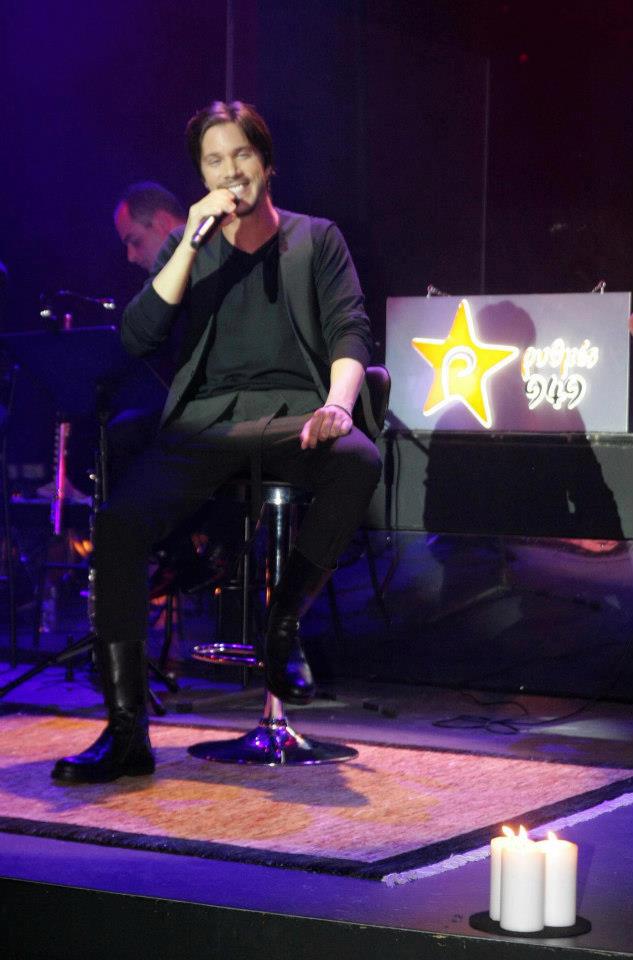 А concert with an unusual title - Exclusive Unplugged Nikos Oikonomopoulos - organized by radio Rhythmos 94.9 was held at the nightclub FIX, on Wednesday, the 27th of February.

Music today is technically equipped till the point the voice of the singer sometimes hardly can be heard because of the many effects used by the sound engineers. That's why it is especially valuable that Nikos Oikonomopoulos appeared before his ardent admirers, accompanied by a small ensemble of mostly acoustic instruments. Microphone in his hand played the role of a humble assistant, without any frills added to the sound. 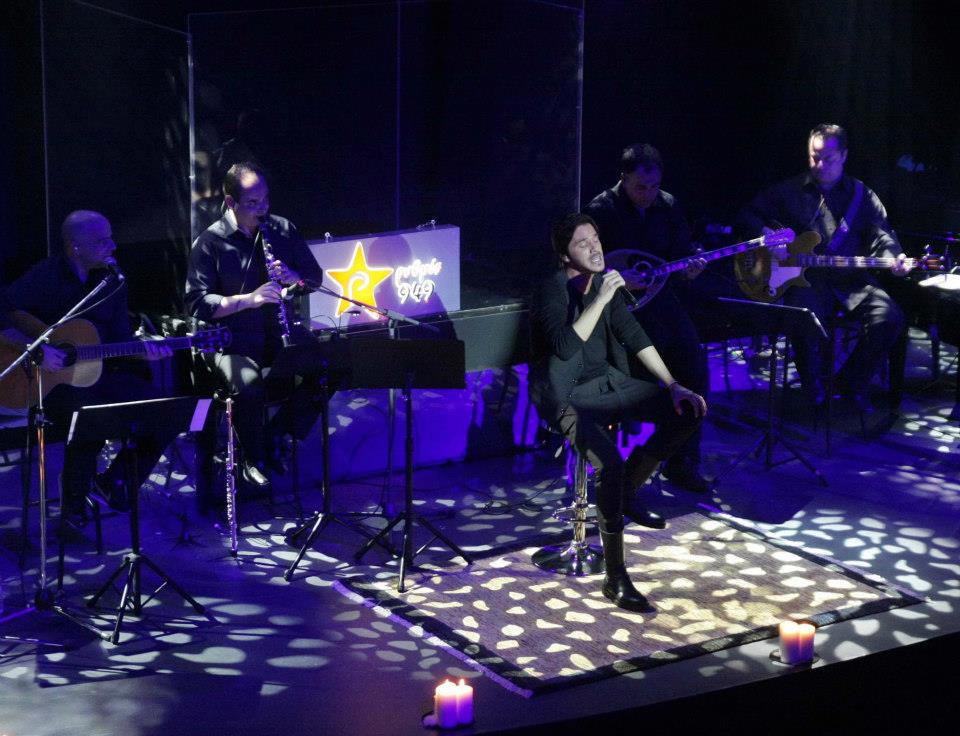 This evening Nikos decided to show what he likes in music, and what he would like his audience to become familiar with and love. He said this at the beginning of the concert and confirmed his words in an interview with Star TV.
It is always difficult to sing in front of a small audience (especially since Nikos Oikonomopoulos is more used to the great crowded halls) due the intense attention of the listeners.  Nikos shared his feelings about it, saying that he always has the fear of performance, but it all goes away as soon as he appears on stage “Before I go on stage, my hands and legs are shaking, but as soon as I am there and feel the love and aura of the audience, everything disappears.
Indeed, once again he stunned the listeners by the marvelous beauty of his voice and heartfelt performance of songs, which mostly were the interpretations of the repertoire of the other singers. 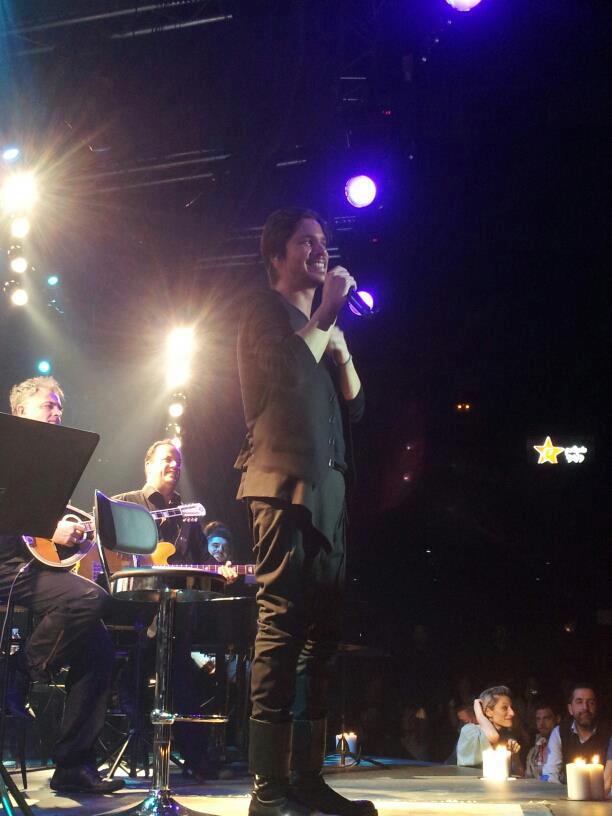 Nikos' main goal was to give something unusual to his fans.  He said in his interview, that he wants people not just to listen to him, but turn their attention to the songs by other artists. So, it was a sort of a promotional mission to support his colleagues, the talented singers of a few generations.

Within a short time, in a one-hour concert, Nikos Oikonomopoulos was able to present to his audience perfectly performed gems of the Greek song from Vasilis Papkonstantinou, Haris Aleksiou, Giannis Poulopoulos, Pyx Lax, Michalis Hatzigiannis, Orfeas  Peridis, Antonis Vardis, Giannis Parios, Dimitris Mitropanos.  Even more than that: he sang in original language a Serbian song "Lane Moje" (famous Eurovision 2004 hit by Zeljko Joksimovic), which Nikos earlier sang live on stage, but this time it was a different interpretation.  Same as all the songs he sang at this concert, this number obtained more personal, more chamber sound, with the gently taken high notes - professionals call this high –class technique “Mezzo Voce”.
In regards of him taking part in Eurovision, Nikos said he does not like this contest, but he wishes success to this year contestants (Greece in Eurovision 2013 to be presented by the  Koza Mostra & Agathonas Iakovidis )
Out of the songs of his own, originally written for him repertoire, Nikos sang   “Ennoeitai” and “Koita na mathaineis”.... Both compositions sounded in a new way, with a fair amount of improvisation in them. Particularly impressive was the free flight of his creative imagination in the last song.
It would be unfair to keep silent about the splendour of the accompaniment, because the band musicians was an equal part in this high-profile gig. Their rendition of the composition "Dust In The Wind" by Kansas, which was played by the band at the beginning of the concert, created a unique atmosphere of the night. 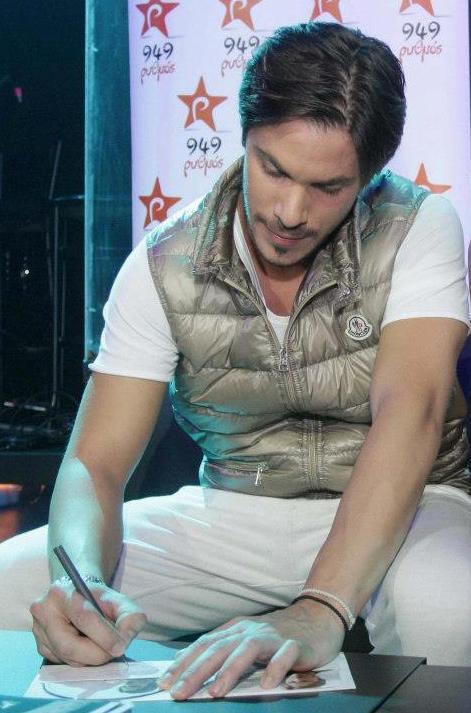 Finally, it's important to say that Nikos Oikonomopoulos again made us surprised and pleased not only with his voice, but also with his attention to his colleagues, his constant concern for the destiny of his beloved genre of  Laika songs.
Aleksiou Antonis Vardis Dimitris Mitropanos. Giannis Poulopoulos Hatzigiannis Nikos Economopoulos Nikos Oikonomopoulos Papkonstantinou Parios Peridis Pyx Lax Νίκος Οικονομόπουλος