Double Platinum Award for the CD "Ennoeitai" by Nikos Oikonomopoulos 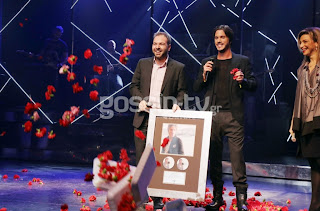 On Friday, 8th of March, 2013, there was a big celebration held at the nightclub “ Fever “ in Athens : the new album by Nikos Oikonomopoulosc “Ennoeitai”  was awarded  with the Double Platinum disc
Makis Pounentis, the director of the radio” Lampsi 92,3” and Margaritsa Matsa, a general manager of EMI (Greece)  solemnly handed the award and plaques to the artist and all the creators of this CD. 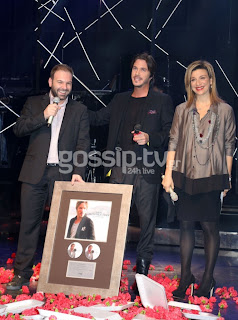 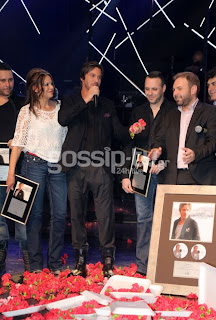 Among the persons who were there to congratulate Nikos for his success were Giannis Plutarxos  and Nikos Vertis!

Giannis Ploutarxos said: "Congratulations, Niko!  Always success!  Laiko voice!  Good guy!  Golden guy,honestly!   Humble on stage,  humble with people!  Well deserved! I wish you the best from my heart!  May there always be those songs for such a wonderful voice.! " … After that  he sang  "Fovamai  pos" 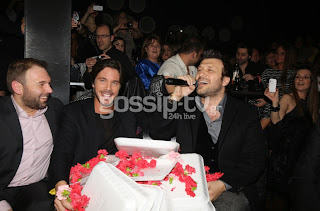 Nikos Vertis also said:  "I want to tell you that you are one of the artists I love.  Good on you to sing the right songs! I wish you the star of your life and God to be always above your head, in your life and in your job, because you deserve it! Bravo for everything! "

Among other celebrities to be found at the night there were Maria Bekatorou with her husband Anthonis  Alevizopoulos,  Katerina Kenourgiou  with her friends, many artists and song writers.
Nikos Economopoulos continues his appearances with Stamatis Gonidis  and Katerina Stikoudi.at Fever for one more week.
As it is announced, Nikos Oikonomopoulos soon to appear at the club  FIX in Thessaloniki, together with the Melisses and Katerina Stikoudi  ,  starting  from  Friday, March 22!