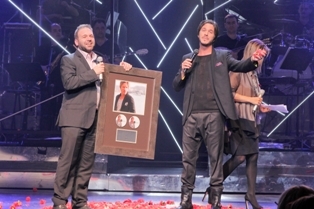 
On Friday, March 8, 2013 the famous singer Nikos Oikonomopoulos was awarded with Double Platinum CD in the presence of a multitude of artists, colleagues and friends who came to the nightclub «Fever» to share the joy of a wonderful evening!

From the beginning “Fever” was packed up.
The first part of the program was presented by  the new and beautiful voices (such as Maria Egglezou and Katerina  Stikoudi) to heat the atmosphere to red.

Nikos Oikonomopoulos came on stage along with the director of the company MINOS EMI Margarita  Matsa and director of the radio station "Lampsi 92.3" Makis Pounentis.  They were followed by all the authors of the winning CD awarded for their achievements.  Among them we saw lyricists Eleni Giannatsoulia, Niki Papatheochari, Nikos Doulamis, Lemonis  Skopelitis and composers Panos Kapiris , Dimitris Paraskevopoulos, Christian Doulamis and others..... 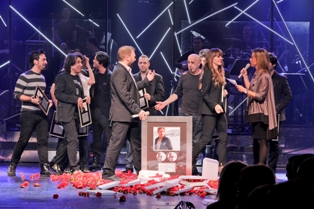 Nikos Oikonomopoulos thanked the record company for their tremendous work,  Makis  Pounendis for radio support, and, also, one by one all the authors for contributing such successful songs for his album. Of course, Nikos did not forget to thank from the bottom of his heart all the people who contributed to this result of his success!

There were some more beautiful surprises for the audience this evening, as there were Giannis Plutarxos and Nikos Vertis among the public, to share the joy of their colleague’s success! 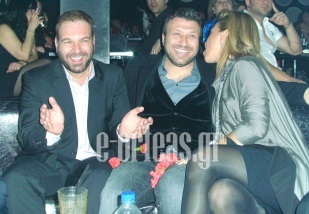 Nikos, as a true professional and respectful man, descended from the stage and headed initially towards the table of Giannis Plutarxos.  Giannis  said: "Congratulations, Niko!  Always success!  Laiko voice!  Good guy!  Golden guy, honestly!   Humble on stage and humble with people!  Well deserved! I wish you the best from my heart!  May there always be those songs for such a wonderful voice! " 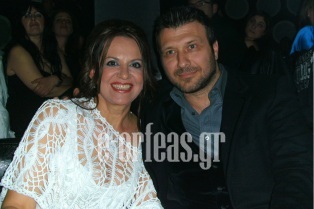 Then Giannis Plutarxos sang his hit "Fovamai pos". Plenty of flowers literally swarmed them and photographers’ flashes fell like rain!
Then it was a turn for Nikos Vertis.  Nikos Oikonomopoulos gave him the microphone and Vertis could sing for the sake of the insistently asking him to do that audience! The entertainment lasted till the early hours, with Stamatis Gonidis  lifting the spirit of people high!