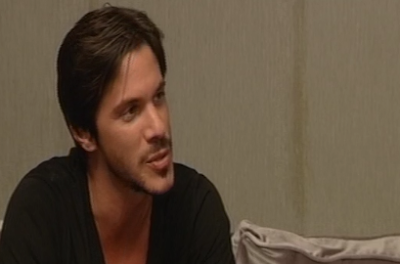 Nikos said, that he and his colleagues are “in a good mood when we are with good people in such a great city as Thessaloniki”

About their programme, he said (being half-serious):  “We have not got clowns and things like that, we have a laika programme that I do, and of course we have “Melisses" and Katerina Stikoudi, who make the most fashionable things, and it seems for these three weeks that we are here, people liked us and I I'm glad that everything goes well.”

Nikos was speaking about his favourite genre of songs:  “The laika song was, is and always will be the basis of everything for music in Greece. Laika song never dies, even though some people would like to be so, it did not, does not and will never end.”

And he added regarding the way he understands the art of laika entertainment:
“It is unnecessary for me to see a clown or an acrobat at laika programme.  I do not mind if someone else does it. We come (to the venue) to hear songs, not  to see the circus”

He believes, that good entertainment can be helpful in the hard times of crisis, but:
“ there are too many people who are unable to have it and I think more about those people, because I know that many of  them want at least once to see their favorite artist and can not do it even once...

This is where our country has come. I hope that at some point this will end,
because people had enough of suffering... everything is chained, we all go through the hard times, because when people do not have money to go out, nor I would have the job that I should have.  So I'm working two days a week now.”

Never the less, Nikos is trying to be optimistic:

“ When we are not optimistic, a black snake will eat us ” (Nikos uses a popular slang expression)
Answering the question if he had lit a candle at Agia Paraskevi (a church of Holy Friday in Thessaloniki), Nikos said :”
“It is very nice thing to light a candle when you are feeling you need to do it.. Not when it must be done...Sometimes I do not go on Easter service, because it doesn’t apply to me. I'm going by myself to talk to God and to light a candle and say thanks for whatever good has given to me. I feel a blessed man.”

Nikos said his opinion about a new way of promotion through the internet (not like it was earlier, through the talent shows):

“It is not bad when young people can showcase their work through Youtube or Facebook and have a good deal of people’s attention, since the audience wants to hear them ...well done!”
About his nearest plans:
“I do not plan very easily.... However I will do some touring in Greece and abroad, very soon after here (Thessaloniki),  of course.”