Nikos Oikonomopoulos as a DJ on radio Sok FM 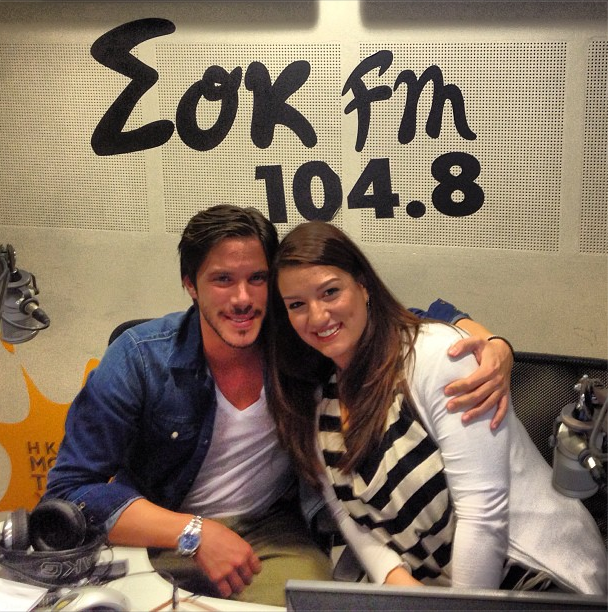 Last Thursday Nikos Oikonomopoulos not only acted as a radio DJ on Sok FM 104.8 radio (Halkidiki), but also managed to answer multiple and often unexpected questions of the radio host Elina Papila. Their conversation was receiving  impulses from the songs of various singers chosen by Nikos, to which, in turn, were periodically added his own songs, offered by Elina.

It is known that Nikos Oikonomopoulos finished recently the joint performances with Stamatis Gonidis which with big and invariable success took place on one of the prestigious scenes in Athens, at the nightclub "Fever". Now he, together with  Katerina Stikoudi and a band  "Melisses", gives concerts at the club "Fix" in Thessaloniki.

Elina Papila asked, if there is a difference between the audience in Athens and Thessaloniki
Nikos was answering, that people in Thessaloniki are easier to become enthusiastic than in Athens. He believes that it is because in Athens people have bigger choice, they can hear and watch whatever and whenever they like. “But in Thessaloniki people are waiting for you”. Nikos was already three times in Thessaloniki with concerts(this is the third time) and he always had a very warm reception. “It reminds me the love of people in Patra,- he said, -  my hometown, where people love me very much.”

In regards of the repertoire he sings Nikos is concerned about the destiny of the laika song, he found the new generation of singers doesn’t want to sing laika. They sing pop (easy) songs, but those songs hardly will survive in time.There are no young singers to sing laika songs.

For the radio play everything is important: who sings the songs and what songs they sing.
In his car he listens mainly to the foreign songs (for example, Nikos put on radio the song “Impossible”  in interpretation by James Arthur) and, besides, we learn he never listens to his own songs. But he listens to other Greek singers, he listens to what he likes.

Nikos finds it hard to make choices,because numerous authors give him loads of songs, and he must choose only 13 or 14 for one album. He can’t make everybody happy with his choice. “I pick songs that I like and that can touch people's hearts, and, unfortunately, some can’t  be selected".

Success of many of his songs comes through You Tube, not through the radio, so when he sings in the clubs his new songs and people know them and sing along. It’s impossible to play all of them on radio.

Nikos does not make daily plans, he sleeps till midday, drinks coffee, talks by phone with people from his work - he is busy with simple things, as he said.

Nikos thinks, that words and music both are equally important for the song, but for him it is lyrics to be the most important component. His favourite lyricist is Eleni Giannatsoulia.
He believes that “Ennoeitai” ( with her lyrics) is a song  that is here to stay. He always wanted something to stay longer, to be left after him.

Elina recalled, that their first meeting on Sok FM was in 2006, so she asked Nikos whether something has changed in him over the years

“Nothing, - he smiles, -  “I just got older”, - he jokes.... He believes he was always not a very easy person, but this is within, this is inside of him as a human, may be due his life, may be naturally.
When he was started his work in Athens he thought it has to be hard, because everybody was there, but , finally he found he did not have problems with anybody.
Nikos does not have any jealousy issues with his colleagues, he is happy with the success of other singers and always wishes them well.

Nikos feels, he did not changed, but those people, including women, that come to him after the concerts in the dressing room, at the present time - they have changed. “They seem more cheeky, more daring”, he said.
He believes that in general something has changed in people, they spend a lot of time in social networks or on their mobile phones, making every their step public. It is affecting their attitude.

To switch the mood, Nikos shared one funny story from his childhood:
“When I was younger, I was a very lively child.
One day we set a fire on a neighbor's yard, we usually were making fire and immediately after that were trampling

it down with our feet.


But this time the fire flared up, grabbed all the land and threatened to ignite the houses. I was about 10 years old and I remember that at this moment I worried so much and my mind raced ahead ... so I thought there would be victims there, and that even though I am a little boy, I have to go to jail and that I am  too small, I'm sorry, forgive me God!”
Only I've seen was the fire, nothing had happened yet with anybody... I did not cry,  but I worried so much.... Anyway we extinguished the fire, but we remembered this for life.”

“I do not like violence, - Nikos says, -. If I'm hurt by something which was said to me, I'll tell about it. I do not like to offend anyone, but if something seriously bad has done for me, I might offend.


Answering Elina’s question about his reaction on woman’s tears, Nikos says:
“When a woman cries and it concerns her personal life or her family and it is something serious, I have an obligation to support her, because I'm sensitive.”

“The reason to end friendship is when somebody is lying, then he is not my friend anymore.”
He has got not many close friends, just 2 or 3 of them, and this friendship lasts for many years.

Nikos regrets that he never had a chance to sing on stage together with Dimitris Mitropanos whom he always loved and admired as a singer and a person.

The singer commented about political affairs, for example, in Cyprus :  "It's very difficult times now in Cyprus. I want to go there very much, but I am afraid people now will not appreciate me. Will they be able to forget everything and to come and watch the singer? “ Nikos believes that Cyprus now started feeling the same problems which Greece is going  through for the last 6 years.

Many thanks to Eirini Eusebi for her help.