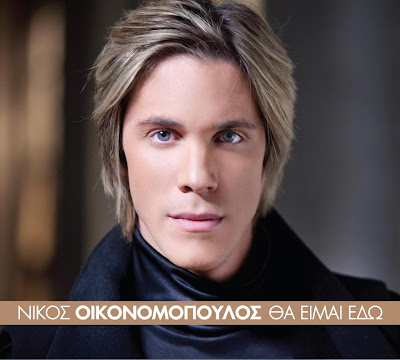 Several months have passed since the release of the double platinum album by Nikos Economopoulos “Tha Eimai Edo”. Obviously, the most striking and original tracks of this CD frighten some with their novelty and, therefore, didn't get almost no airplay on radio, even though these songs have earned the love of the listeners on the Internet and at the live concerts of this outstanding artist.
For example, two songs written by Eleni Giannatsoulia, words, and Georgos Sabanis, music, (# 2 “Tha eimai edo “and # 8 ”Pou tha me pas”) are the real gems of the album, and if this disc was released somewhere in England or Germany, these two tracks would have a leading position in the radio broadcast. This would happen because currently there is a certain criteria in Europe for the music addressed to a mass audience: songs must match the chosen format, but, at the same time, carry the features of novelty and freshness added to the genre they represent. Note the overwhelming success of Adele: it is her originality and singularity which caused it.

As for Nikos Economopoulos, we already were saying about unique beauty of his voice and unusual for a laika singer looks.

Now it is a time to say that these two songs are innovative, they are developing the style of laika and go further than what it was assumed by its traditional framework.

The laika genre reaches with them the level of the pan-European trend.

These songs is something qualitatively new in the musical style of ethnic music in general.

Let us take, firstly, the song "I'll be here." (Tha eimai edo). This zeibekiko goes beyond the tradition. To start with, the intro here is very short, not the unfolded solo of bouzouki, as it normally happens. The voice of the singer enters suddenly from the top note, grasping attention of the listeners and bearing an instrumental function, representing the style by itself. In general orchestration of this track is more transparent than what it is expected from zeibekiko, but, at the same time, the choruses here are reaching the level of symphonic development. The lyrics of the song combine philosophical generalizations with the unexpected striking personal lines, with typical for the poetry of Eleni Giannatsoulia contrast images and twists.


The second track of the same authors, “Where will you take me to” (Pou tha me pas), can be attributed to the ethnic ballade. It has features of the Greek song merged with the European tradition. The polyphonic instrumental intro with its pastoral flute is written in the spirit of Renaissance. It ideally suites the exquisite blend of images and symbols, filling up the lyrics. The latitude of breathing in the melody of this song is unique and requires an equally unique artist, like Nikos.


Both of these songs need a big artist to be performed, they can't be sung by an ordinary singer. They are written for the outstanding singer of our time, which is Nikos Economopoulos.

But it looks like there is a certain fear behind the scenes, like there are some forces there which doesn't like the fact that one of Greek singers is not just supporting laika song, but at the same time, develops this style, takes it to the new heights, gives a new life to it.

Greek music is interesting to the entire world due its unique origins, and it is possible to attract more attention to it if to develop and enrich them. These two songs by Sabanis and Giannatsoulia from Nikos Economopulos' album "I'll be here" is a big step forward in the history of Greek laika songs. They deserve great recognition in the country of their origin and all around the world.

The fact that they are not on radio, casts a shadow on the Greek music business, and evokes a feeling that there is a sort of a strange and incomprehensible interest to hide and conceal the best of what they have.
Eleni Giannatsoulia Georgos Sabanis Nikos Economopoulos Νίκος Οικονομόπουλος