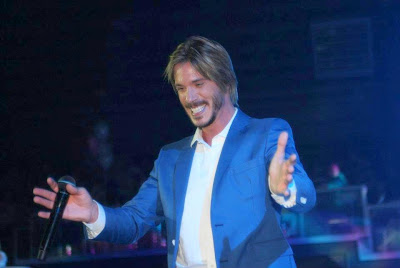 After the triumphal series of concerts in Thessaloniki with Elli Kokkinou, Nikos Economopoulos arrived to Lamia for the exclusive performance in “Ktima Pasiakou”. Here he was asked a few questions by the reporter of the FTHIA TV.
During the conversation before the concert the famous singer said he does not have a particular song he loves more than other and that he loves all of them and hopes, that people feel the same. Nikos expressed his gratitude to the people of Lamia, who came to his show and said, he hopes they will enjoy their time.  Regarding the political and economical situation in Greece, Nikos expressed his optimistic position:
“How can I be pessimistic in regards of my country? If to be thinking pessimistic way, all of us will be sick. I am an optimist and believe that in the nearest 2-3 years there will be some growth in all the business sectors and worldwide. I hope and believe in that. I can’t think bad, I can’t think, that things will go worse, because my work is to entertain people and to be able to do that I must have a psychological support. These days the psychological support has gone from television, every day they show only bad events happening in our country or towards our country. I think, this is a mistake, because we are not only what some reporters want to show or some foreign politicians think of us. We are the country and the nation which invested a lot in the world culture and I am sure we can offer even more, and I think we can do that. I am sure about it!”

Nikos confirmed that he is an optimist.

When the FTHIA host called him “an idol of youth”, Nikos straight away answered, he does not like this title and he feels himself being just a singer who wants to make people feel better. He, as a young person, believes that young people have to believe in future and be optimistic. Otherwise they will not be able to do anything. Answering to the question if the politicians are to blame for the current situation in the country, Nikos said, that not only politicians, but all the people are responsible.
"We have to correct mistakes and to heal the wounds" , he said. This interview clearly revealed that despite the fact he said he is just a singer, Nikos Economopoulos is a mature civic personality and a real positive example for the young generation.