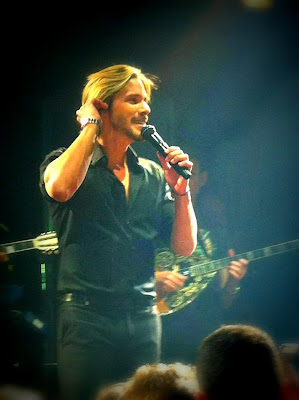 Finally, Nikos Economopoulos made it in Germany! We’ve learned about his upcoming concert at the REX- club (Düsseldorf) almost by an accident, and even when we called at their office, the administration could not answer some questions about the show. There was a sort of a mystery about this Monday night on 30th of April 2012. It is possible that one of the reasons for half-secrecy of Nikos' performance lies in his incredible popularity, despite the complete absence of an expanded advertising campaign around him internationally. Nevertheless, on Monday night the club "Rex" in Düsseldorf was packed up. To the great delight of the audience, Nikos gave a show of the highest level, widening the program with some new songs such as "Psakse me", "Kali Kardia", "Poutana stin psichi" from the double platinum album " Tha Eima Edo" (2012), in addition to other favourite tracks from his repertoire gained over the years of singing. The laiko-music, presented in the solo program by Nikos, was preceded and alternated by the techno and trance mixes of the club's DJ, but this fact did not create any problem for the audience to enjoy the night in full. Nikos Economopoulos proved again his reputation of the most amazing entertainer and the best beautiful voice bearer. This was a triumphal success. Before the concert, on the way of writing the advertising article we were using help of some German interpreters. After watching some live videos of Nikos they were surprised, why he is singing only for the Greek audience. Their opinion was he is too good for the shows in small Greek clubs. Again and again the same question is there: why is Nikos Economopoulos still not being promoted for the international audience? Every time this question is coming out from his constantly appearing new fans from all around the world. We appreciate informational help by Patista Maria and Panajiotis Stefanidis
Düsseldorf Nikos Economopoulos Nikos Ikonomopoulos Nikos Oikonomopoulos Νίκος Οικονομόπουλος